Chopstick Challenges and So Much More...

Our first few days in Seoul have been interesting to say the least. We have been introduced to new cuisine, tampered with many new and unusual looking gadgets, met some fantastic students in the College of Agriculture and Life Sciences at Seoul National University, had brain overload with learning Hanguel (the Korean alphabet), exchanged and examined Korean currency, and learned to maneuver buses, subway systems and maps that have very little English.

Sounds like a lot huh? I think so, but I feel very accomplished. Our days have been packed with excitement so far. In my opinion, lots of bonding time with new fellow agriculture educator friends has led to a successful first few days on this adventure.

Teamwork is a must on a trip like this, and although our goal is to collaborate with Korean students in the Agriculture and Vocational Education Program at SNU to learn and share thoughts about school based agriculture education, there are a lot of other necessary items we've had to pick up fairly quickly to make the transition to life in the Republic of Korea for a month as normal as possible. I would like to share just a few of these things with you. 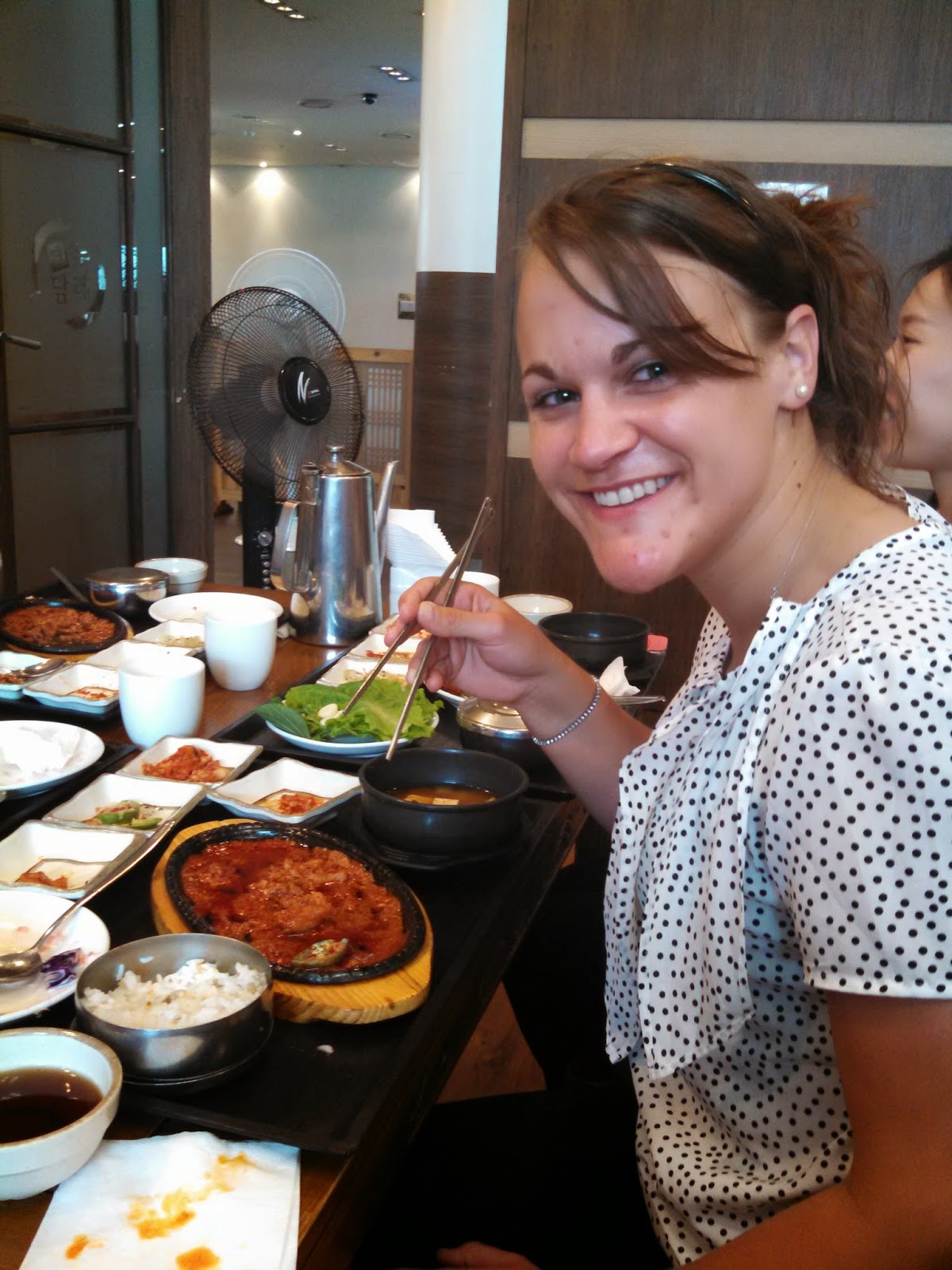 First, I will mention what has been MOST challenging to me....and that is learning to eat with chopsticks. I sort of got the hang of using chopsticks at home before leaving for out trip, come to find out I became somewhat proficient in the use of wooden chopsticks only.

You may ask...What is the problem then? Well, all chopsticks used in Korean restaurants and cafes are metal, which believe it or not, are slippery and a bit harder to maneuver. After three days, I still feel like a little kids that just cannot learn to pee on the potty. A good outcome of this is that I have been eating a lot slower, due to challenging myself and forcing myself to use chopsticks successfully and with ease, which has caused me to eat less.....because I can actually feel when I am full. If you know me, eating slow has never been an ability I had, much less I'd like to say I have bad habit of eating very fast.

Speaking of the potty, many older buildings in Korea have a septic system that can not handle flushing toilet paper. Therefore, there are trash cans located in each bathroom stall in which you are supposed to put all your used waste. Seems pretty weird and gross when you're not used to it, but you wouldn't want to be the unlucky one to take the chance of flushing paper and creating a clog. Additionally, many of the toilets seen are called bidets. A bidet is a fancy toilet with a remote controller on the side that has many different buttons. If you so choose, it will wash you upon completion of using the restroom.

The electrical outlets have also been something very different from what we see in the United States. As we rely on these to charge our phones, tablets, computers, cameras and other handy gadgets, we have had to learn to utilize the proper adaptor in order to use the two prong AC power plugs found on all of our small devices that require electricity. Not only do we need to be able to plug our devices in, but we need to make sure that the voltage being transferred is set to the correct compatibility mode so we don't fry our appliances.

Hanguel....does that mean anything to you? Well, it didn't mean much to me until three days ago. Now I can say I know basics of a new language. It's pretty darn cool. Our language teachers have made learning how to write and read Hanguel very fun! Yesterday I even got to learn how to write my own name.

Last but not least, the currency. Korean currency is called the Won. Currency is in paper bills and in coins, just like in the U.S. However, the exchange rate for U.S. currency to Korean Won, to keep it simple, is one United States dollar equals one thousand Korean Won. Every time we look at the price of something, it seems so expensive, until we do the quick math in moving the decimal point to determine the equivalent price in U.S. dollars. Exchanging currency has been a neat opportunity, one I believe everyone should do at least once in their lifetime.

I hope you enjoyed my post on some unique encounters I have had in Korea thus far. It has definitely started off as a unique, dynamic, and interesting experience. Until next time, annyeonghi gaseyo, 안녕히가세요, good-bye!
Posted by Unknown at 6:15 AM