We have been given an open ended assignment called  a Do It Yourself project, for this project I researched Korean desserts then attempted to craft one myself.

In all of the talks we have had about Korean food, we have never mentioned desserts. Through my research I have discovered that Koreans do not have dessert after a meal as we do in the US. Desserts are typically only eaten for special occasions or as a sweet treat with tea.

As I began researching for a recipe I came across recipes  like black sesame seed porridge, butternut squash porridge, candied sweet potatoes, and other various dessert recipes containing vegetables. My first thought was I must be looking at an incorrect recipes page, but I have concluded that I was in the correct place. Though there are some sweet dessert recipes such as the chapssal donuts recipe I selected, but many of their desserts contain vegetables and seem to healthy to really be dessert.

With this I set out to gather the needed supplies for this recipe, on the list was sweet rice flour, self rising flour, castor sugar, and the hardest to find ingredient red bean paste. Prior to heading to the grocery store I had to do some research. I learned that castor sugar is basically very fine sugar, though I could not find anything labeled castor sugar I did find a domino extra fine sugar that from my research would be very similar. 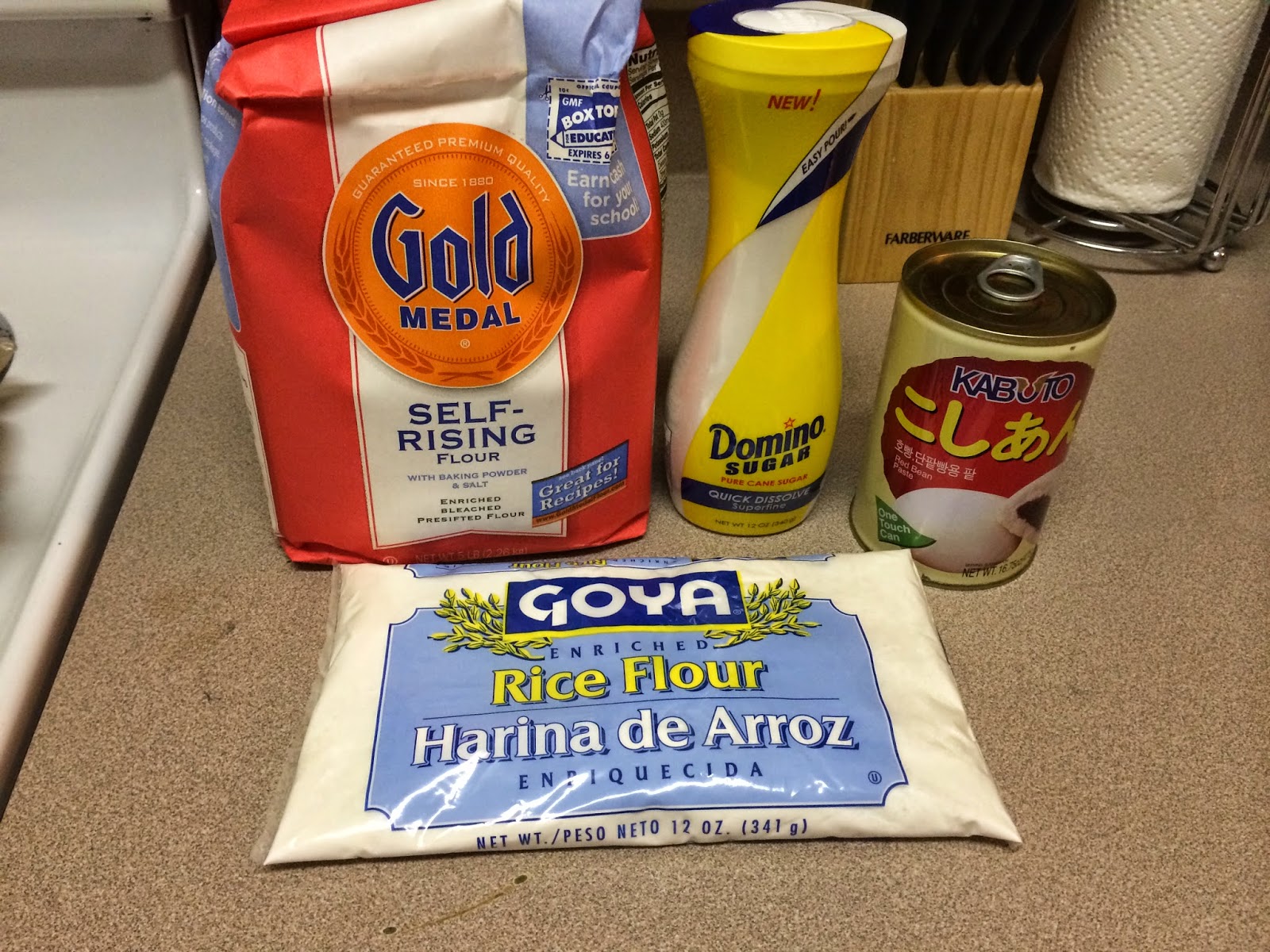 Next I headed I headed to Wegmans to gather the need items that I couldn't already find in my kitchen. I easily found the two flours, then all I needed was the red bean paste. I looked high and low and could not find this anywhere, not Wegmans, not Walmart, and not Giant, then I remembered that there is a small Korean market near my apartment complex, so I headed there to see what I could find.

What I found was an interesting atmosphere, quite similar to a crowded small market type shop, I looked and looked for red bean paste, and eventuality had to ask for help or accept defeat. I asked and was directed to two types of red bean paste, the girl assured me they were the same but I still am not sure that I got the correct red paste.

With my purchases in hand I headed home to try my hand at making Korean donuts.


I began by mixing the rice flour, self rising flour, butter, salt and hot water together to make the dough. This is also where the problems began, to start the measurements were all in grams so I had to find a converter online, where I discovered that grams do not convert nicely to cups so I had to estimate many of my measurements. Once I mastered these measurements my next problem arose, my dough turned out to be the consistency of  a milk shake. There was no way I was going to make balls out of this, so I added another cup of rice flour and another half cup of self rising flour and finally I had dough. 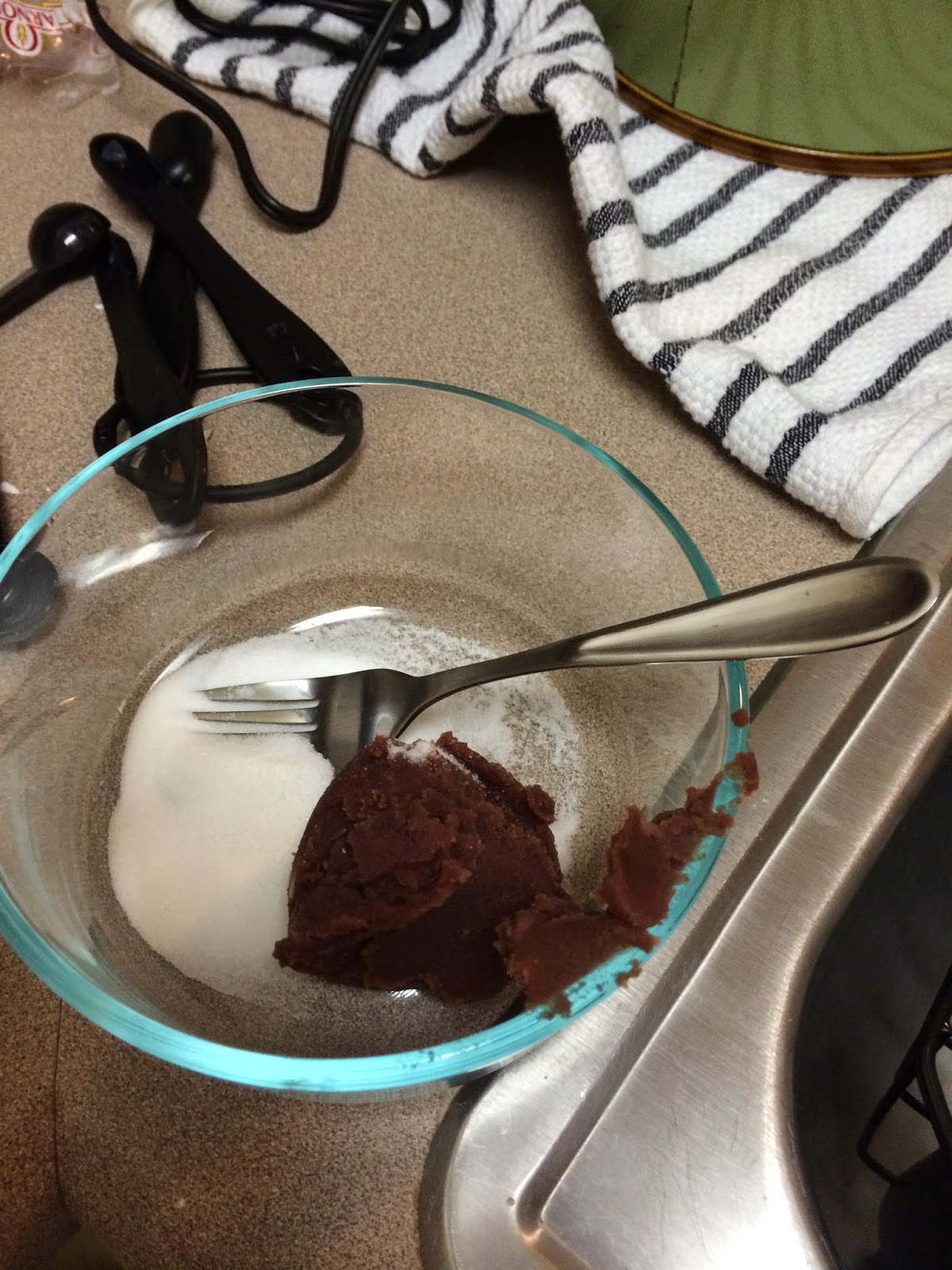 I then began on the filling, boiled red bean paste and cinnamon. Prior to opening the can of red bean paste I thought it would be comparable to a raspberry filling. However, once I opened the can I learned that it is just what it says beans in a paste form.

Next I filled the dough balls with the bean paste mixture and deep fried them in vegetable oil. This also was a new experience, the only thing I have ever fried in oil was chicken prior to today.


After frying them to golden brown, I removed them and rolled them in sugar, then I had to taste them. They were interesting, they taste like fried dough and sugar, but they have a pasty aftertaste, from the red bean paste mixture. This concluded my Korean dessert experience, though desserts are my favorite food group in the US, I do not think they will be my favorite in Korea, but I will keep looking for something that peaks my interest.