Recently, we all completed an assignment where we all had the option to research a topic of our choice regarding Korea.  I wanted to make this a meaningful experience for myself, so I settled upon researching the presence of the Tiger in Korean artwork.  I have a degree in animal science, and I've always really enjoyed learning about wildlife, so when I first learned of the significance of the Tiger to the Korean people, I was very intrigued.  The Tiger appears in Creation stories in Korea, and continues to be a symbol of national pride.  In addition to the myriad of ag-related interests I have, I also really enjoy creating artwork.  I draw, paint, needle felt, and generally enjoy creating any kind of art. I decided to explore the meaning of the Tiger through my own artwork and decided that I would compile a variety of examples of Korean Artwork depicting the Tiger, which I would then use to guide the creation of my own representation of the Korean Tiger.

Here are a few examples of the artwork I found: 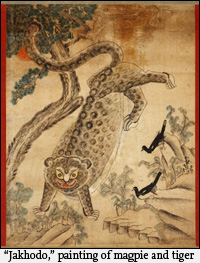 Above photo from Korea Times

Jar from the Collections of the Asian Art Museum 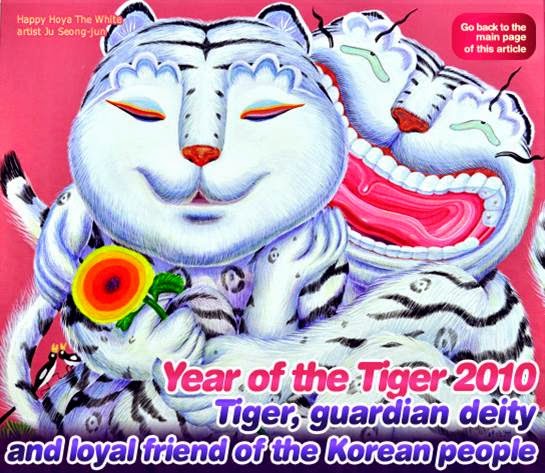 Over the course of my research, I found that in addition to the Tiger, the Magpie was repeatedly appearing alongside the Tiger.  Upon further investigation, I discovered the the Magpie was viewed as the bearer of good news, and the Tiger represented a variety of things, including good luck, courage, pride, and being a guardian or ward against evil spirits.  If you do a quick Google search of the Tiger and Magpie, you'll find a variety of "minhwa" or Korean folk paintings that depict the two creatures side by side.  You'll also see that the Tiger is frequently depicted smoking a long pipe: Apparently, instead of starting out fairy tales or folk lore with the phase, "Once Upon a Time...", Korean Folk lore starts with the words, "A Long time ago, when Tigers smoked long pipes...".  I thought that was really neat!  According to my research, this depiction of the fierce tiger with a comical expression and smoking a pipe, was classic Korean satire.

You might also see the Tiger depicted with Rabbits:

Often the Rabbit appears as well, as the Tiger, Rabbit, and Magpie appear side by side in Korean Folklore, with the Rabbit outsmarting the Tiger.

So, utilizing my research, I decided to create my own painting of the Korean Tiger!  See below: 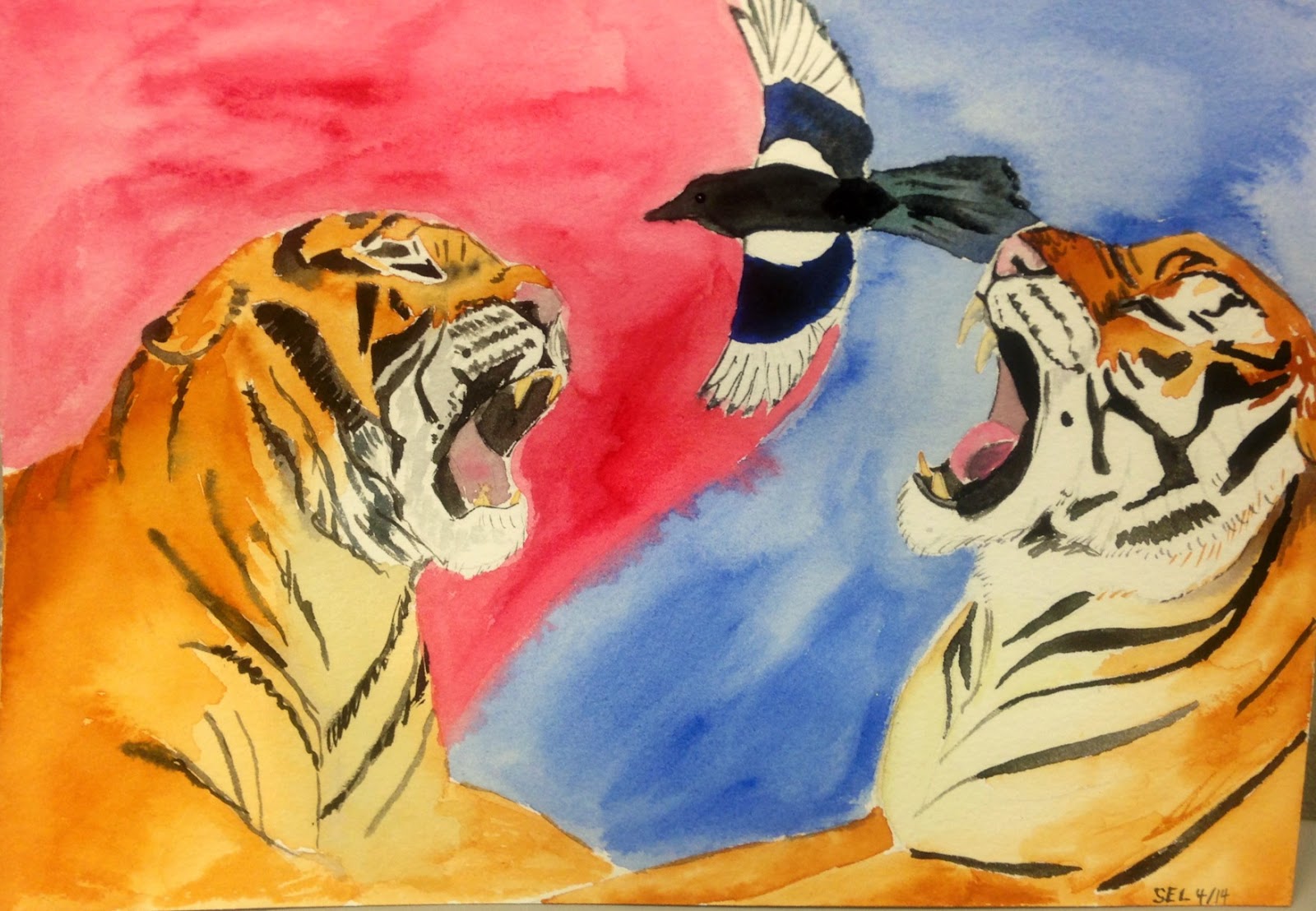 I decided to put two Tigers in this painting to represent both parts of the Korean Peninsula: The People's Republic of Korea (South Korea) and the Democratic People's Republic of Korea (North Korea).  Korea is known as the "Land of the Tiger" regardless if it is the North or South part you are referring to.  Ironically, the Tiger is extinct in both countries, but a very small chance exists that the Tiger might be living in the DMZ.  The Tigers are engaged in a snarl/roar, but are tolerating each others' presence, in order to suggest the current armistice between the two nations.  Between the two Tigers is a Magpie, calling upon the ancient meaning of good news.  Hopefully, the two countries can come to an amicable agreement, and the Magpie was put between the two Tigers to suggest that there could be a better relationship between the two.  The background of red and blue hearkens to the Yin Yang on the South Korean flag, representing a balance of the forces in the universe.  Harmony is the ultimate goal in balance, and hopefully the two Koreas can come to live in harmony with one another.  Finally, I chose to paint this subject in watercolor, as many of the minhwa in my research were pen and ink with watercolor.

I hope you all have enjoyed my painting and learning a little bit more about Korean art!  I'd be interested to hear of any other interpretations people might have about the Tiger in Korean art and culture.
Posted by Unknown at 3:15 PM